Kay just loves to dance. From Morris dancer to Appalachian clogger, to teacher of Cajun and Zydeco, she just loves to dance. Joining Tanglefoot in 1998 opened up a whole new world of great friends and exciting adventures such as dancing with the Hillbillies in Pikeville, Kentucky 2000. 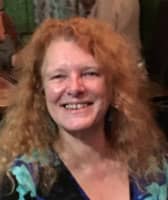 Ann has been dancing since she was three years old when she joined a ballet school and has continued with tap dancing as an adult and then joined Tanglefoot in May 2002, since when she has had an absolutely fabulous time with a great crowd of friends. Ann also helps teach Cajun and Zydeco at workshops in Rochester and Whitstable, and basically just loves to dance.

Becky enjoys all dance, from circle dancing to ballroom but one of the best things about Tanglefoot is the opportunity to dance to live music. She likes visiting festivals, hearing new music and joining in dance workshops. When not dancing, Becky cooks, reads, plays scrabble and canasta, practises yoga and struggles with cryptic crosswords.

Christine, unlike other members who have danced all their lives, didn’t take up dancing until her retirement, so has a lot of lost time to make up. She loves music, travelling, walking, reading, cooking and socialising with friends.

Gwen enjoy all forms of dance as a sociable way of keeping fit. Having danced Irish, ballroom and short sword rapper, she is very pleased to join Tanglefoot to add Appalachian step clogging to her repertoire. Her other interests include mixed media artwork, craft making and Pilates.

Ric is really a guitar and bass player; a latecomer to Appalachian, having done a little tap dancing in his twenties. He joined after seeing a TV programme about Appalachian step clogging and an article on Tanglefoot in a local paper. He started in the band, playing double bass and gradually moved over to dancing as he picked up the steps and Terry joined, taking over on bass.  Following Terry’s departure, Ric is now back playing double bass with the band when not called upon to dance.

Lesley has danced since she was 5 years old when she started ballet lessons and then tap. Thirty years ago she swapped this to join her first Morris side, and has danced with different sides since then. This activity has lead her to dance at events in America, Germany, France and Estonia. Ceilidh dancing and Irish set dancing are also on her list. A few years ago she added Appalachian to the list of styles. Dancing is a big part of her life and has to be done.

Jean was looking for an interesting new activity to keep her mind and body fit after retiring her dog from Agility classes and competitions. Although she had always wanted to dance it was only when she joined Tanglefoot Appalachian Cloggers that she found what she had been missing all her life! Since that day, she has not looked back. When not practicing her steps, Jean enjoys walking, and a wide variety of arts, crafts and creative activities.

Dancing is Vron’s passion; Ceroc, Salsa, dabbling in Lindy Hop and more recently Ballroom. As a child she learned the basics of Tap and Ballet, but hung up her tap shoes until nine years ago when she happened to see a group of Appalachian Cloggers at the Whitstable Festival. They were having so much fun that she wanted to be part of it. She joined Creekside Cloggers in 2011 and became thoroughly addicted. In 2018 Vron became a member of Tanglefoot and has loved every minute.
Other interests include reading, walking, Badminton, generally keeping fit and her black cat Holly!!

Dancing has always been part of Martine’s life in some way. She started at 10, learning the Cha Cha, which is still one of her favourites.
‘I like the lively dances, it’s the best way to stay fit.’ Which is why later she took up 50’s jive. She joined Tanglefoot in 2018 after watching them at the Sweeps festival. ‘They looked like they were having such a great time’. Martine also likes singing, walking and yoga and is hoping to take up LindyHop this year.

Viv has been dancing and playing in Folk bands for many years, setting up and leading Fiddler’s Elbow ( a ceilidh band with rock numbers) in the 70s. Plays fiddle, keyboard, accordion, guitar and sings, and is looking forward to exploring new music with new musicians and learning a new style of dance. Also enjoys acting, mainly in horror movies!

A very accomplished guitar player. Another quiet man but we hope to change that!! And he comes with baggage!

Angie is glad to be part of such a great band. As well as enjoying playing the banjo, she likes sculpture, art and especially beer festivals!!

Mike plays piano and fiddle and enjoys folk singing and Morris dancing. He was encouraged to join Tanglefoot in 2005 and quickly learned the Old Timey style of fiddling. He is now attempting Bluegrass, that is when he’s not oil painting, gardening or re-enacting the English Civil War.

Rich plays 4 and 5 string banjo for Tanglefoot. Rich has played guitar in bands since the early 70’s and is lead guitarist and singer for Fiddler’s Elbow, a ceilidh band. More recently Rich formed and performed in Kent based rock bands Cover Story and Sundown. He also plays bass guitar and mandolin and has dabbled with ukulele, lap steel guitar and the theremin. Rich loves the infectious rhythms of Appalachian dancing and music and is keen to learn more banjo pieces.